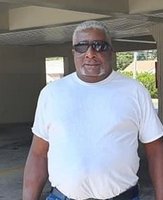 Robert B. Miller born March 21, 1951 in Sumter, South Carolina. He moved to Camden, New Jersey where he resided until his death on October 17, 2020. Robert completed school up until the 10th grade at Woodrow Wilson High School in Camden New Jersey. After High School, he was employed at Campbell’s Soup Company located in downtown Camden for many years. Robert loved sports. His favorite team in football was the Philly Eagles and in basketball it was the Chicago Bulls. Robert was a very kind and respectful person. If you were a family or friend my brother Robert would try to help you as much as he can. He was very close to his brother Clarence Miller. Robert use to always address his favorite brother Clarence, by his nickname “Hunn”. He got a kick out of spending time with his nieces and nephews, the twins as he called them (Sade and Shania Bradshaw). They could always make him laugh. He also had three other favorite nieces that he were close to Joyce Jones, Margaret Townsend and Shamia Reid. Robert was also a member of Lord Of The Breakthrough Church under the leadership of Pastor Bernard Kiner. Through that ministry, he dedicated his life to Christ. He considered Lord Of The Breakthrough his church family and everyone loved him there. He leaves to mourn: his Mother Margaret Miller Jordan, his brother Clarence Miller and his sister-in-law Darlene Miller and his nieces and nephews. Robert was preceded in death by his father James Miller, his sisters Mary Jones and Annie Mae Miller and his brother Jimmy Miller. In Loving Memory of the Family